Afraz Siddiqui is a passionate technologist & recent graduate of Harvard University. Afraz graduated from Harvard with a Masters in Computer Science & Information Management Systems with High Honors. Prior, he completed his Bachelors in Management, receiving a Minor in Entrepreneurship & Concentration in Health Science. Afraz has been a fullstack programmer for 10+ years with language expertise in C, Java, PHP, Objective-C, and many others. His passion for innovation and progress is exemplified through his successful startup exit, organization advisory roles, and commitment to greater causes. 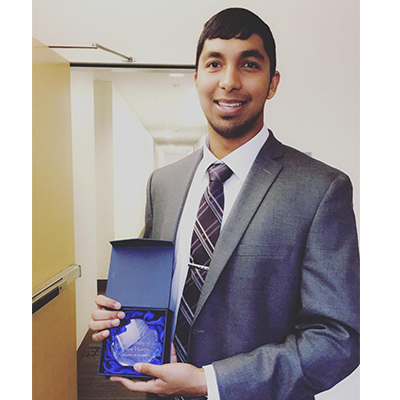 "Afraz exemplifies the ideal characteristics of a co-worker. Afraz is a talented coder, but that ability is just a component of what makes him a skilled software engineer. His ability to simplify tasks, plan efficient roadmaps to achieve objectives, and explain his thought process and coding practices in a coherent manner is what makes him a step above other programmers. His coding ability in conjunction with his non-technical capabilities and business understanding makes him unique in the industry especially for someone of his age."

Member, InciteHealth: Fostering innovation in the area of Primary Care & other specialties through Harvard Medical School.

Realized the value created by coordinating and leveraging the data from connected devices - 5G.

Learned how to develop and implement my own IoT technologies, solutions, and applications for longterm deployment.

Examined developments that will shape the industrial landscape in the near future in many areas such as manufacturing and others.

Learned priceless values through community service, philanthropy, internships, and mentorship over the course of 3 years at this institution.

Served in various capacities in many campus organizations, such as the President of the university's Bike Club.

"A management major and entrepreneurship minor, is the epitome of perseverance, He was offered a position as a programmer at the fast-growing social media network, which he has turned down in order to pursue a Master’s degree at Harvard."

For more information about past experiences & scope of work, please contact Afraz Siddiqui.

"The ones who are crazy enough to think that they can change the world, are the ones who do."

With a life/work interdisciplinary philosophy, Afraz believes in more than just engineering or writing business plans. When Afraz isn't working, you will find doing him any of the following.